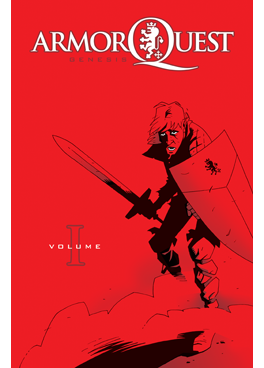 ArmorQuest tells the story of a young boy named Timothy who finds himself on a quest to join the ranks of the Emperor's Knights of the Way with nothing but a sword, a pair of allies, and a hope to one day return home as a hero. Along the way, he meets some strange companions and encounters dangerous enemies, while learning to rely on the tools of the Emperor... the armor of the Knights of the Way.

Chapter 1 - Young Timothy's peaceful world is turned upside down when a wounded dragon crash-lands just outside his village. The safety he had once taken for granted is shattered... rumors of a dragon invasion are becoming reality. But when Timothy tries to rouse the people of his village to action, the boy finds that he is not just up against the evil power of the dragon, but also the cowardly apathy of his people. Now Timothy must decide: join his friends and family in hiding and hope the dragon ignores them, or take up his sword against the beast... alone.

Chapter 2 - The quest begins! After inheriting his father's shield, Timothy leaves everything he knows to join the Knights of the Way. With his new friends, the knight Kanika and the wanderer Bernard, the small band finds their way blocked by a deadly Earthwyrm -- a burrowing dragon that breathes darts of fire. Worse than that -- Earthwyrms never travel alone...

Check out this motion comic version of the awesome series.