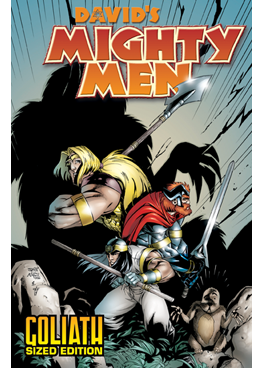 Join David and his mighty men in this whimsical but reverent retelling of some of the Bible's greatest heroes. Created by Marvel, DC, and Darkhorse Comics creator, Javier Saltares. Two complete stories in one graphic novel.

Story one - "Trust"
"Four against four hundred?" What would you do if God told you to go with only three strangers of his choosing to face an army of four hundred? In this original issue that's exactly the position young David is put into. We invite you to follow him as he meets three extraordinary warriors: Shammah, the father of the fighting arts, Eleazar, the steadfast soldier, and Adino, "the biggest and the strongest."

Story two - "The Giant Mole Hill"
Our Mighty Men are asked to investigate a case of stolen grain. Sounds simple? Not when things are blown totally out of proportion. Cool heads must prevail to solve this mystery or two provinces go to war!