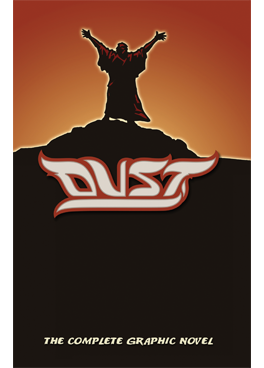 Dust is the compilation of the first four comic books from Dust Press, showcasing four well-known Bible stories in an all-new light.

Fire from Heaven pits the masked priests of Baal against the prophet Elijah in a battle that is uncategorically decided by something not of this world.
The Blessed Curse: The King of Moab seeks the dark skills of Balaam, in order to curse the Jews and stop their progress. How do God's people battle a foe they cannot see?
Seven Sons: Based on Acts 19, the name of Jesus was being used, and sometimes abused. Men were casting out demons in Jesus' name...but is faith just a formula? What will happen when the worlds of Spirit and Man collide?
The Glory Departed: Jeremiah was just a teen when he was called by God to be a prophet. Would genuine faith return to Jerusalem, or would Jeremiah witness its destruction?